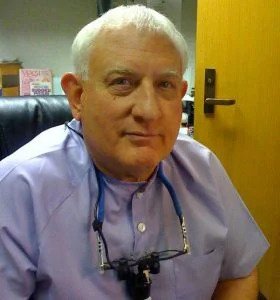 Dr. Charles Holman practices in our Whittier location. He grew up in Iowa and started college at the University of Iowa. He then moved to Lincoln, Nebraska and finished at Union College. From there he went to dental school at Loma Linda University and graduated in 1963 with his dental degree. After a year of private practice in Hacienda Heights, he then joined the U.S. Army Dental Corps at Ft. Hood, Texas and was there for two years.

Dr. Holman received his specialty certificate in Endodontics at Ohio State University in 1971. During this year he moved back to California and this marked the beginning of a long and successful partnership with Dr. Niccoli in Whittier. In addition to his private endodontic practice, he teaches dental students at the Loma Linda University School of Dentistry. Dr. Holman is married and has three grown daughters. After his wife died, he married his first girlfriend from Iowa, Joyce. Together they have five grandchildren. When Dr. Holman is not spending time with his family, he enjoys skiing, singing in his church choir and traveling with his wife Joyce..

To help facilitate the referral relationship, please click on the link below to download and print our Referral Form.